Mar 29, 2021
Bayesian statistics
18 min read
Mar 11, 2022 15:59 UTC
This model is useful for accommodating data which are grouped or having multiple levels, as the main feature is the addition of a between-group layer which relates groups to each other. The presence of this layer forces group-level parameters to be more similar to each other, displaying the important properties of partial pooling and shrinkage.

This is our first step to extending a lot of the things we’ve talked about to slightly more complicated models.

Here’s the R packages used throughout this page.

The data set is adapted from Hoff’s book, and presents the weekly time (in hours) spent on homework for students sampled from eight different schools. Data for school 5 were modified for demonstration purposes.

A summary of the data by school can be found in the table below.

First thing to note is that the sample sizes are all around 20 except for school 5, which only has 9 students. The average time spent is also higher, which might be an artifact solely due to the smaller sample size, or it could be evidence that students from school 5 spend more time on their homework than their peers.

Figure 1: Boxplot of weekly time spent on homework by school.

The rest of the schools seem roughly similar to each other, although school 1 seems to have a slightly higher mean. Maybe we trust this more because of school 1’s larger sample size.

We will sequentially go through three different modeling strategies for this data set, where the first two are going to be things we’ve dealt with in the past. Soon we’ll see why these models aren’t very suitable for this structure of data.

We’re specifying it this way because the observations are continuous values. We are assuming all observations, regardless of which school they came from, are from the same distribution. With conditional independence, the sampling density function is:

For our prior model, we are going to assume fairly little intuition1 about the parameters. We will specify:

Using JAGS, we may obtain the following posterior sample densities and trace plots. 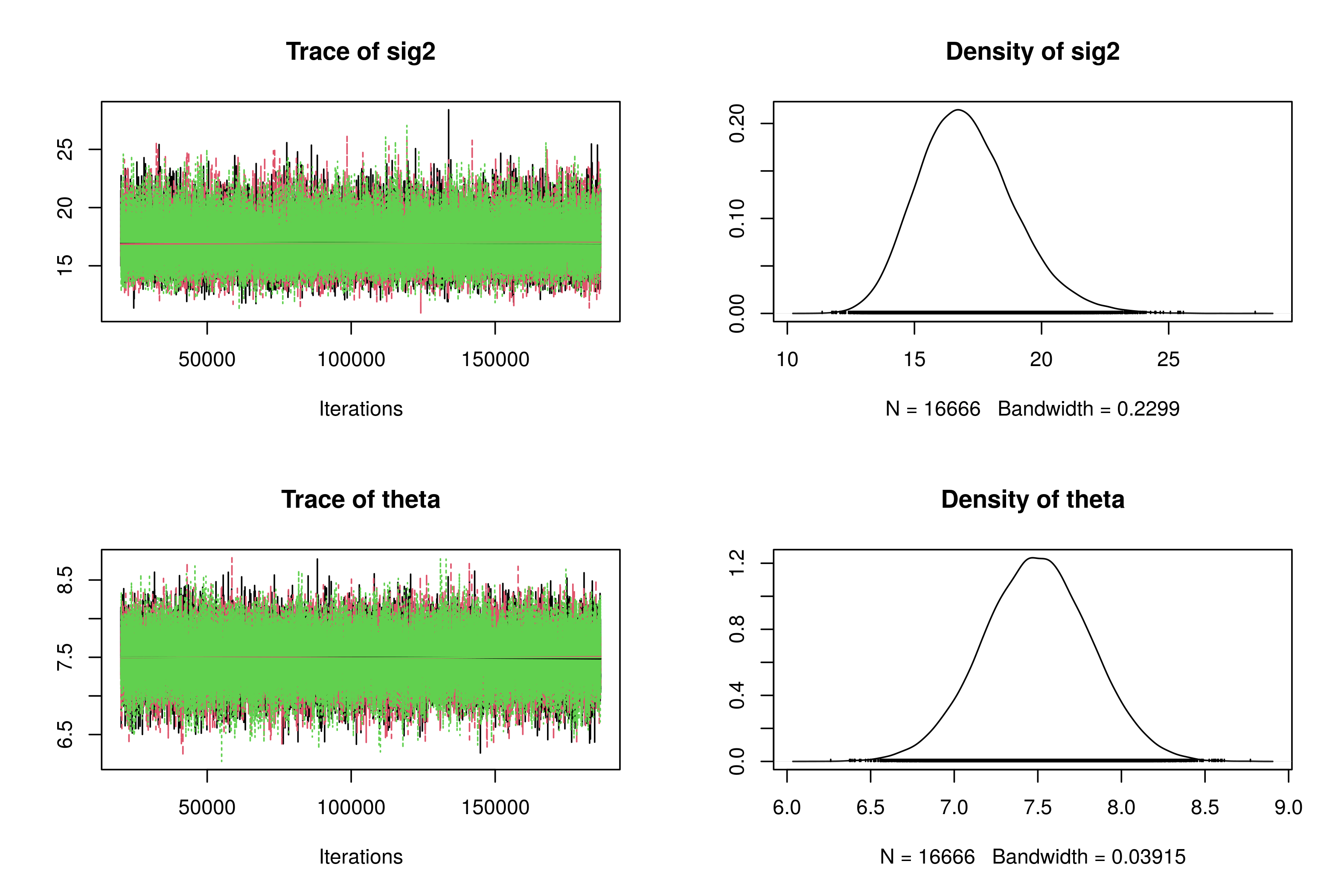 Both trace plots indicate convergence because the chains are oscillating among the same set of values. The posterior median for \(\sigma^2\) is about 16.95, and the posterior mean for \(\theta\) is about 7.49.

The primary issue here is that we cared about comparing the schools, but the way we specified this model, i.e. aggregating all schools into one model, doesn’t incorporate the information about the schools at all!

The “complete pooling” in the name of this model is a reference to t-tests – in some cases we pool the samples together and estimate the variance based on the combined sample. It’s essentially the same idea here where we pool all the samples together into one big data set, and only estimate one set of parameters.

We can address the issue in Model 1 by writing down a model which accounts for the group structure. An alternative way to specify the sampling model is to specify a separate model for each of the schools. Within group \(j\),

We are giving each school its own \(\theta_j\) and \(\sigma_j^2\) because we may want to estimate the average and variance for each school. Assuming conditional independence across all \(J\) groups, the density for all our data is given by:

In this model we have a total of 16 parameters to estimate:

We will specify the same prior model for all the parameters. Assuming independence across all \(J\) groups:

Since we specified independence between groups, we can essentially fit each group’s model separately!

From the posterior samples of \((\theta_1, \cdots, \theta_8)\), we can see that school 5 still looks higher than other schools, but there is also more variability due to the smaller sample size.

We may then use these CIs to compare between groups2. For example, the 95% CIs for \(\theta_5\) and \(\theta_6\) don’t overlap, indicating evidence that school 5 students average more time on homework per week.

The other issue is that this model does not inform us about the true overall mean time \(\mu\), regardless of the school. How could we “combine” estimates of \(\theta_1, \cdots, \theta_8\) to get a posterior for \(\mu\)? Simply taking the average of the eight values might give us a crude guess, but it doesn’t make sense to give all \(\theta\)’s the same weight as the sample sizes could be different. It makes more sense to build \(\mu\) into our model.

We named this model “no pooling” because we are not grouping any observations together unless they are from the same school. We are not combining information across groups.

Our next step is to address the issues posed in Model 2. More specifically, how can we account for the fact that our group means are likely to be related to each other?

Sampling and prior distributions

Let assume the variances within each group are unknown but equal, i.e. \(\sigma_j^2 = \sigma^2\) for all \(j\). Then we will specify the sampling model in two pieces. The within-group sampling model looks very similar to the one in Model 2. For group \(j\),

Now comes the second part where we account for the possible dependency between the \(\theta\)’s, the between-group sampling model. Since we believe the group means are related, we model them as values drawn from a between-group model:

Here \(\mu\) can be interpreted as the “overall mean” across all groups, and \(\tau^2\) is the between-group variance. This describes heterogeneity across group means. We also assume conditional i.i.d. here, so

The \(\theta\)’s are conditionally independent although they all come from the same distribution that’s centered at \(\mu\). This is going to have an interesting effect on the estimates that we get for those school averages.

The prior for \(\mu\) is the same as the one we used for the \(\theta_j\)’s before as we no longer need to specify priors for the \(\theta_j\)’s. We could specify inverse gamma priors for \(\tau\) and \(\sigma\), but we don’t have to anymore because conjugacy is not required for JAGS3. 1000 was chosen as an arbitrary upper bound for the standard deviations, which shouldn’t matter too much as long as the value is “large enough”. Inverse-gamma priors such as \(\text{IG}(0.01, 0.01)\) for variance parameters are notoriously poor and sensitive if the true variance is close to 0 (see Gelman, 2006). This is more important of an issue typically when estimating the bwteen-group variance \(\tau^2\).

Putting everything together, our model looks like the following. This is called a hierarchical model because there’s multiple layers to the (sampling) model, in particular the within-group model, the between-group level, and the prior model on the top layer.

Using JAGS, we may obtain posterior samples and inspect the posterior CIs for the parameters.

Figure 4: Posterior CIs for the parameters of interest.

On the right we have the posterior CIs for the variance parameters \(\sigma^2\) and \(\tau^2\). The within-group variance is considerably larger than the between-group variance, which is evidence that there’s not an effect associated with the particular grouping variable.

Model 3 is known as a hierarchical or multi-level model because it is characterized by multiple layers within the model to represent natural group structure4. Hierarchical modeling is a major strength of Bayesian inference due to:

Hierarchical models are a natural compromise between two extreme models: complete pooling where parameters are estimated assuming all data come from the same population, and no pooling where parameters for each group are estimated completely independently of any other group. In model 3, we see partial pooling of our estimates, meaning that information can be borrowed across groups to help with estimation.

Recall that school 5 has a very small sample size (\(n_5 = 9\)). This partial pooling is useful because we can “borrow” information from other groups to assist in estimating \(\theta_5\).

The same pattern shows up with the hierarchical models. When comparing the posterior mean estimates for \((\theta_1, \cdots, \theta_8)\) in models 2 and 3, estimated \(\theta_5\) values are considerably different.

To observe this effect more clearly, we may use a scatter plot for the posterior estimates in the two models. The posterior mean for \(\mu\) from model 3 was 7.77, as shown by the dashed line.

In some cases, e.g. schools 2, 4 and 8, there’s not that much of a difference between the two model estimates. However, there is a large difference with the \(\theta_5\) estimates. Because we had a small sample size, the model essentially “trusts” the data within that group less, and shrinks \(\theta_5\)’s estimate towards \(\mu\), i.e. borrowing information from the other groups. Model 3 pushes group-level estimates from Model 2 closer to \(\mu\).

In summary, with hierarchical models, shrinkage allows estimates of group means to shrink towards the overall mean. The degree to which a group’s estimate shrinks depends on its sample size and within-group variation. Estimates for groups with larger sample sizes are generally more precise.

Shrinkage is a natural property arising within Bayesian hierarchical models, but hs also been explored in the frequentist literature. To learn more, search for shrinkage estimators such as the James-Stein estimator.

Finally, hierarchical modeling can help to automatically alleviate issues arising with adjusting for multiple comparisons. Notice from Figure 4 that Model 2 might imply the true mean for school 5 is different from school 6 since their 95% CIs don’t overlap. If we did more comparisons between \(\theta_5\) and \(\theta_4, \theta_6, \theta_7\), we might say school 5 students average more time on homework than schools 4, 6 and 7.

However, if we look at Model 3, we no longer get the same conclusion because the credible intervals overlap. There’s not enough evidence to suggest a significant difference between \(\theta_5\) and \(\theta_4, \theta_6, \theta_7\).

If we had chosen inverse-gamma priors for both variance parameters in Model 3, we can use a Gibbs sampler as all of the full conditionals can be derived explicitly. It’s highly efficient compared to Metropolis-Hastings, but not necessarily the best modeling choice.

Finally, Model 3 is the Bayesian analog of a random effects or variance components model in the frequentist setting. The schools are a random sample from a collection of a large population of schools. We do care about the group-specific effects (school averages), but we also care about comparing the effects of the schools in general and the average of all schools. Hierarchical models can also have more than two levels!